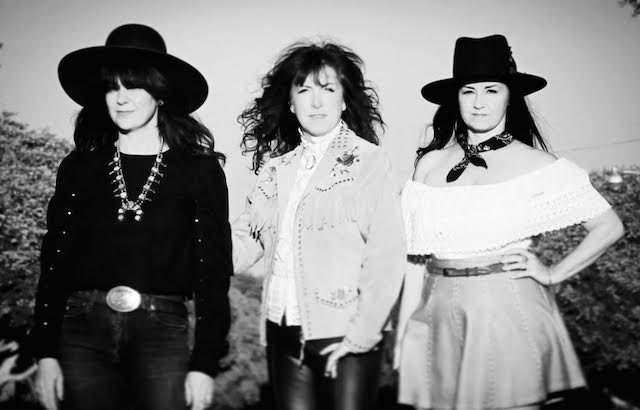 Inspired by women across many industries, musicians Adrienne Isom (NOCONA), KP Hawthorn (California Country Records/CALICO the band) and event producer Karen Rappaport McHugh (Muddy Girl Productions) has announced the formation of a new company, REBELLE ROAD to fiercely champion Americana, Roots and Country music from a female vantage point. They will produce a handful of events in California before the official launch during SXSW, on Wednesday, March 14 at Ramada South Austin with a full day of showcase performances.
We’re thrilled to join with many women already working to ‘change the conversation’ for female artists,” they acknowledge. “We’re joining them in a specific way by creating opportunities for the many incredible females in American music – both on stage and behind the scenes. It is our aim to strengthen parity – male and female – across all outlets.”
Deriving their company name from the gutsy life and legend of Belle Starr, the Los Angeles-based partners with roots in California and Texas, are developing a local venue showcase series, a traveling Rebelle Roadshow, as well as a podcast and boutique music festival. They have also optioned several properties to develop for Film/TV.
As part of their mission, Rebelle Road also hopes to strengthen the identity of musicians from the “California Country” community. Artist KP Hawthorn, who runs California Country Records and is one of the few female record producers in country music, created the annual “California Country Social” at Fond Object Records during Americana Fest in 2016 after realizing that the Golden State was under-represented. “We have a rich history in country music that has been minimized over the past few decades and there are so many incredible working artists on the West Coast that we want to spotlight.
The trio is taking a page from the Bandit Queen’s life as they acknowledge studying and stealing from every venue series and festival, mostly created by men, to develop new concepts that are infused with feminine energy. “Belle Starr was a maverick of her time, an outlaw who lived by her own rules to survive,” they state. “If women need to step up to receive parity, then that’s what we’ll do — create our own platform.” With a nod to traditional booking standards, they emphasize those male artists will not be excluded.

Popular posts from this blog

What is SEO & Why Should We Care About SEO?

February 10, 2018
What is SEO & Why Should We Care About SEO?
Search engine optimization (SEO) is a methodology of strategies, techniques, and tactics used to increase the number of visitors to a website by obtaining a high-ranking placement in the search results page of a search engine.

We have probably heard of SEO, It is the process of affecting the visibility of a website or a web page in a search engine's unpaid results,

We may have some important questions for our business and our website, such as:
- How do we, for our site or our company’s site, “optimize” for search engines?

- How do we know how much time to spend on SEO?

- How can we differentiate good SEO advice from bad or harmful SEO advice?

What’s probably exciting to us as business owner or employee is how we can truly leverage SEO to help drive more relevant traffic, leads, sales, and finally revenue and profit for our business. (That’s what you will find on our blog slowly)

So why should we care about SEO!
When using the search e…
Read more

April 28, 2018
Social media is every business partners in marketing tactics, it also helps brand awareness, shares and interact with customers and prospects, and create important touchpoints in the changing customer journey. Social media marketers are still looking at how social marketing strategy looks like. According to the research of Social Media Examiner’s, the result says that 90 % of marketers say that social media is important to their business, however, only 41 % say that they’re able to measure the return on investment of their social activities. 1. Your brand’s value proposition. The first thing that you should do to build a successful marketing strategy is to define the value of your brand to your audiences. If you aren’t able to show the value to your audience, then you can’t show any value to them. You should ask yourself or come up with the basic things and questions that your audience possibly ask:   Why would someone follow or engage with me on social?What do I want my followers to k…
Read more

How do I start social media marketing?

April 08, 2018
Social media marketing refers to the process of gaining traffic or attention through social media sites.
Here are 10 steps to get you started.
1. Determine your goals.
What do you want to get out of your social Web participation? Why are you doing it? Are you trying to generate direct sales? Are you trying to offer a form of customer service? Do you want to build relationships with customers and boost loyalty? Your answers to these questions greatly affect the type of content you publish and the activities you participate in on the social Web.
2. Evaluate your resources.
Who is going to create your content? Who is going to maintain your social media accounts? Who is going to respond to questions and be the face of your business online? Do you have the technical ability in-house to join the online conversation? If not, are you willing to learn? Can you or someone who works for you write well? You need to be sure you have the necessary people in place to execute a social media marketing pla…
Post a Comment
Read more